We recently received the Anki Cozmo Robot to review. This is one smart robot with a mind of his own and my daughter has had a lot of fun getting to know Cozmo and playing games with him. 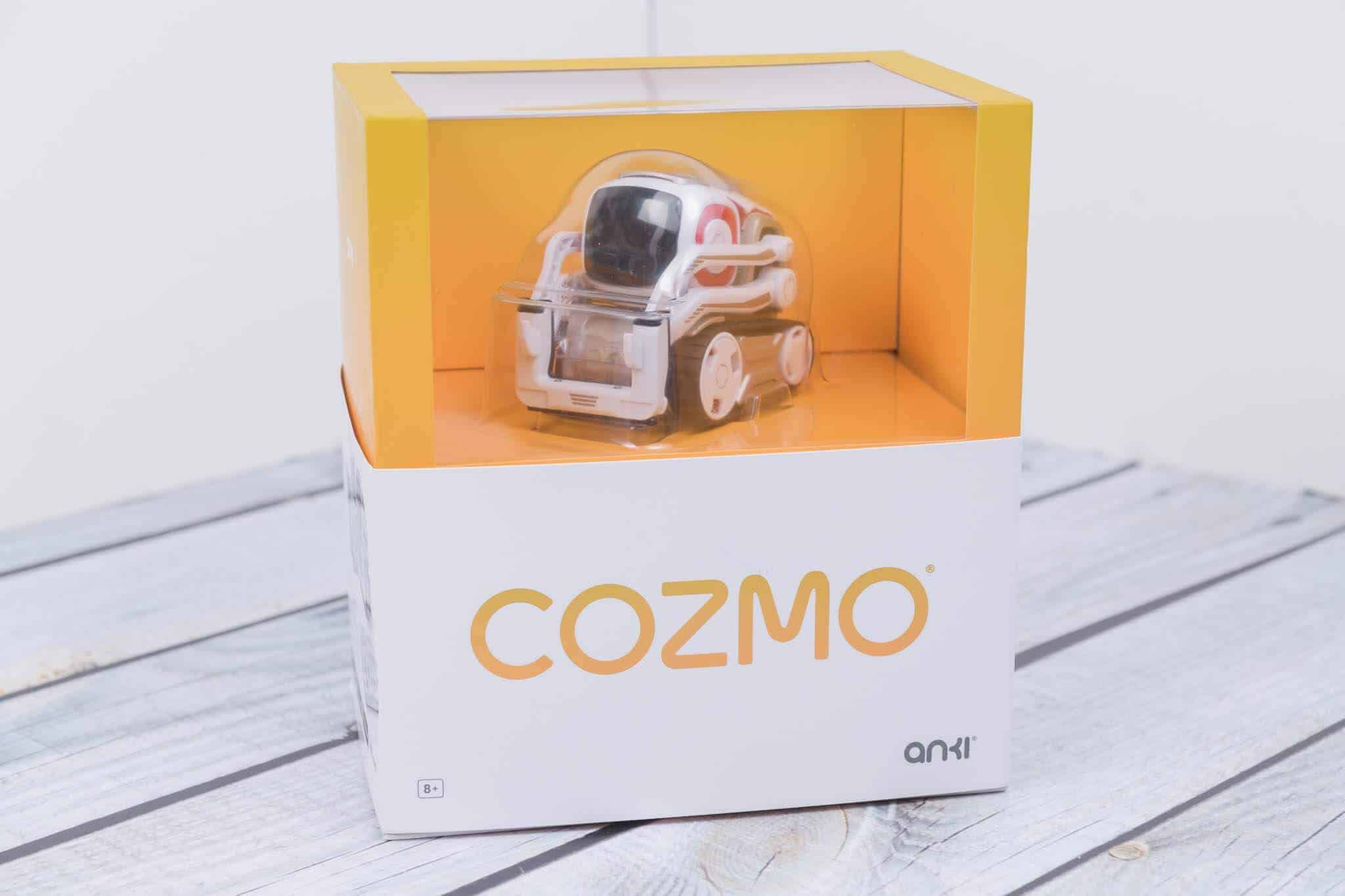 For a small robot, Cozmo has a huge personality and it was a joy to review. Cozmo has his own WIFI Network and uses your mobile device to connect to him directly.

You will also need to download the Cozmo App from either Android, Apple Store or the Amazon app store, relative to the device you are using to connect with Cozmo.

Cozmo Out of the Box 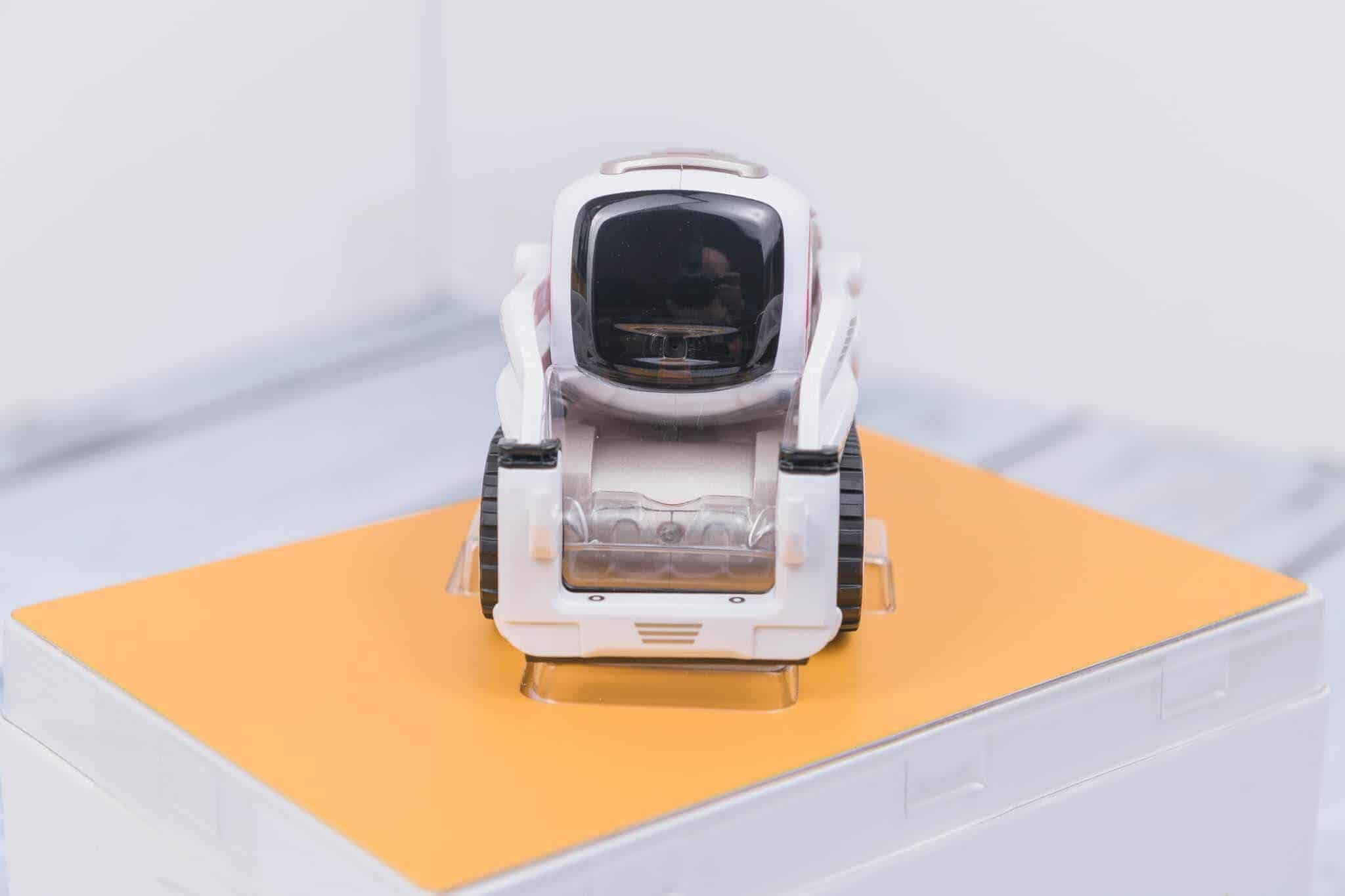 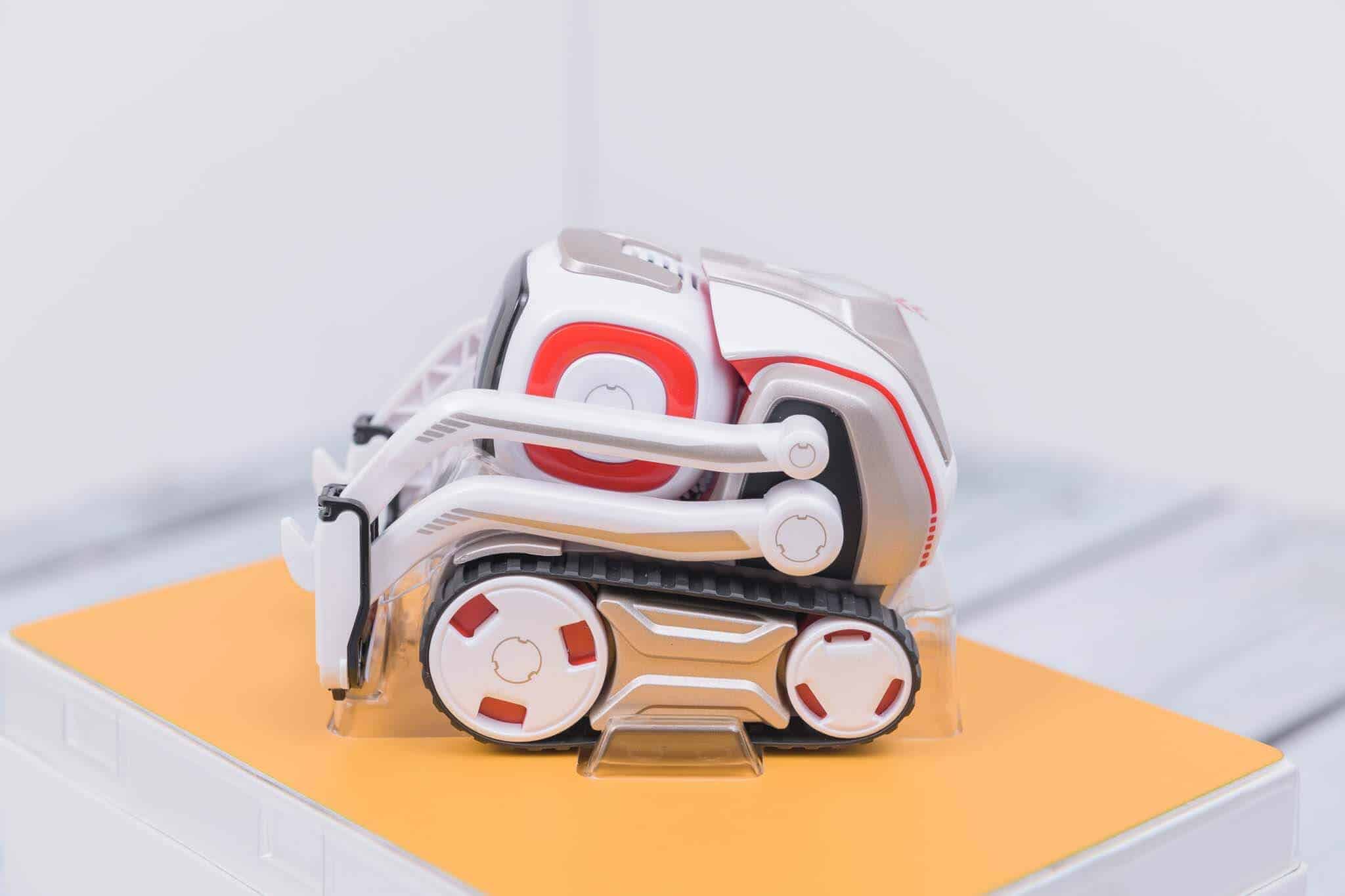 Cozmo is very compact and is bundled with 3 cubes and a charging base. The Charging base is compatible with most mobile USB chargers. So, you do not need to worry about which charger you need or can use with Cozmo. 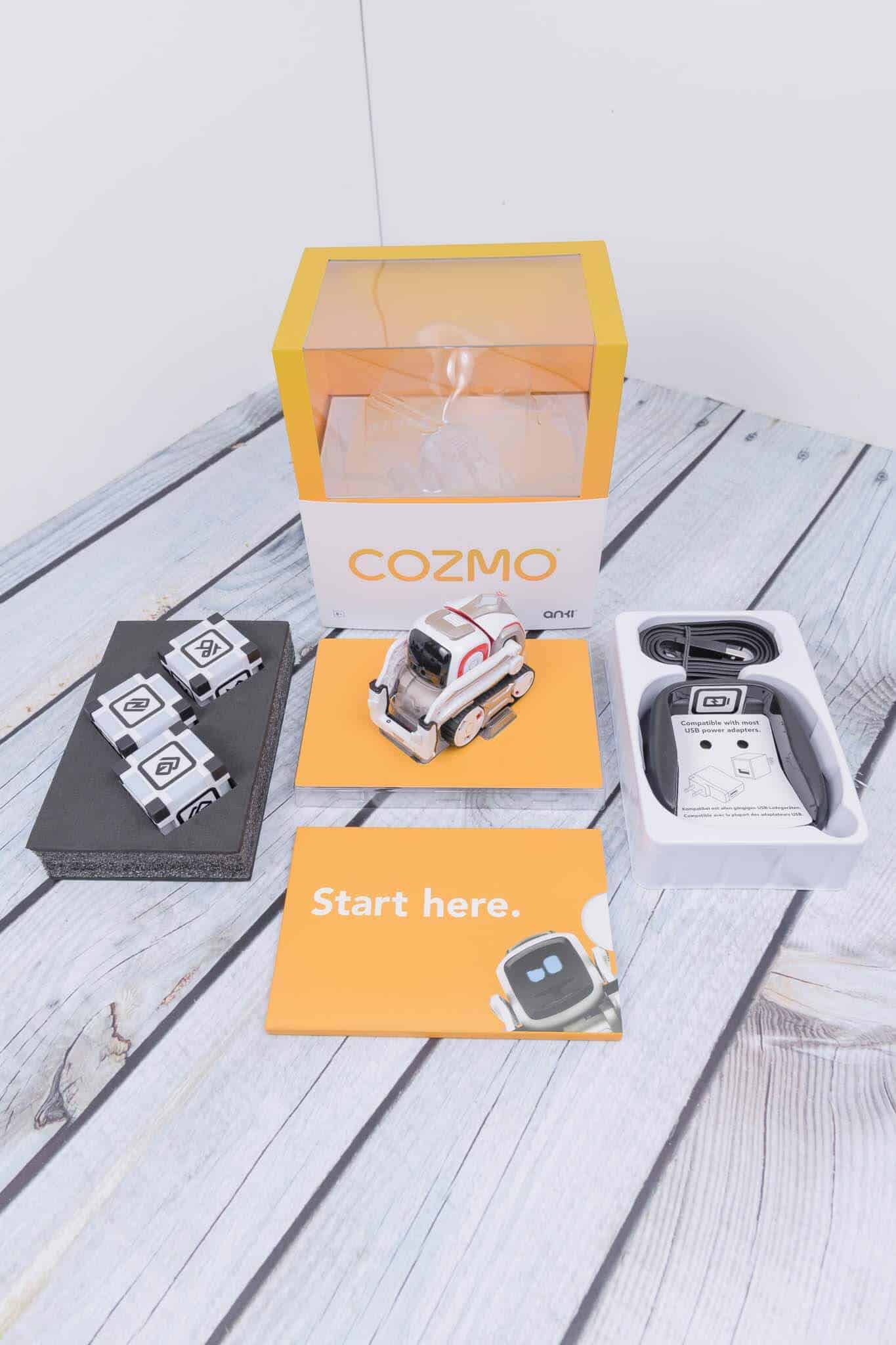 Whats in The Box Portrait mode

The Cozmo packaging is contained within the box which Cozmo arrives in. The Instructions are written in multiple languages with diagrams on how to connect and work with Cozmo. 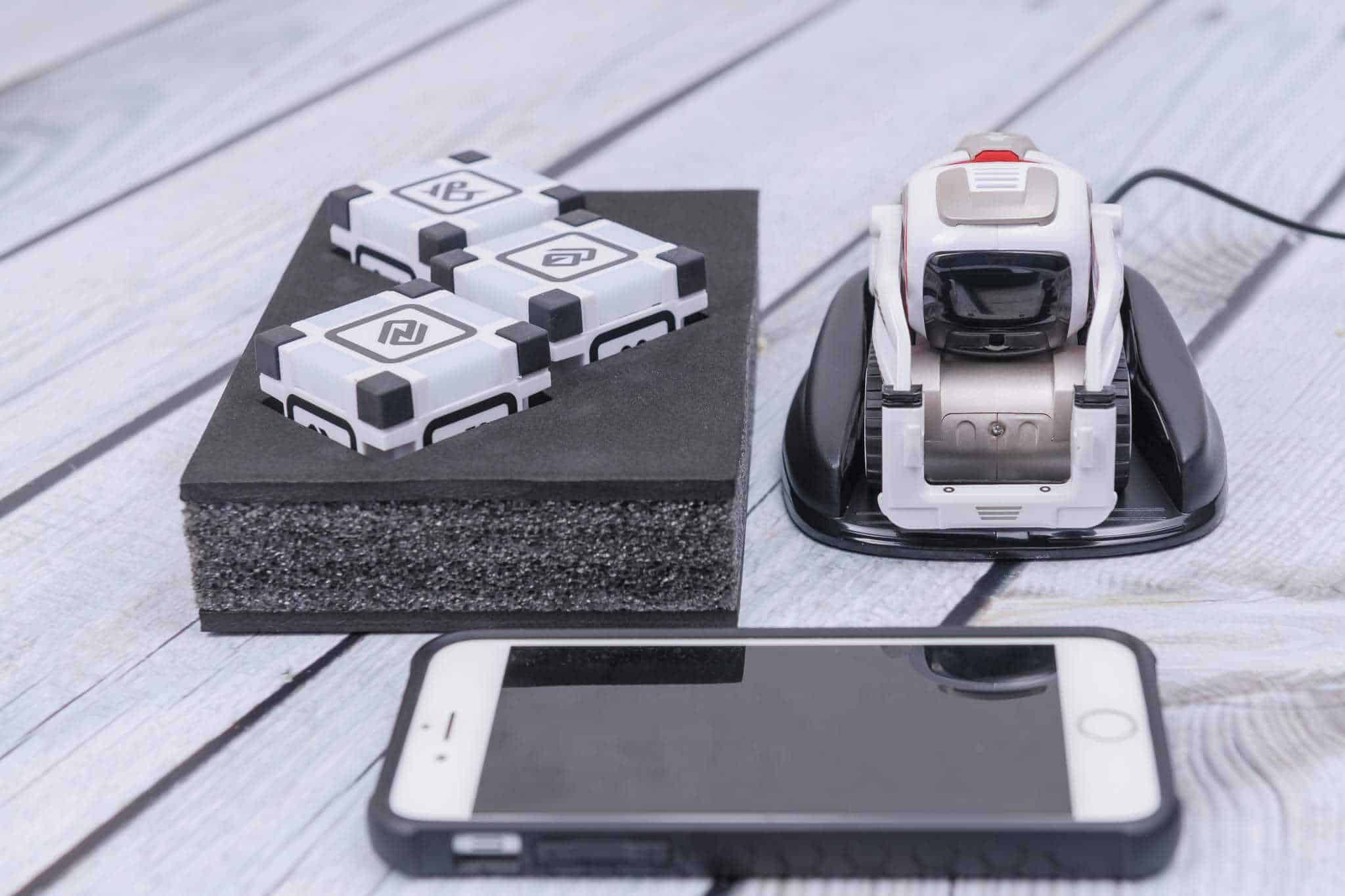 When Cozmo comes straight out of the box, you will need to let Cozmo charge for a couple of hours. This will also allow you time to download the mobile app suitable for your device or tablet. 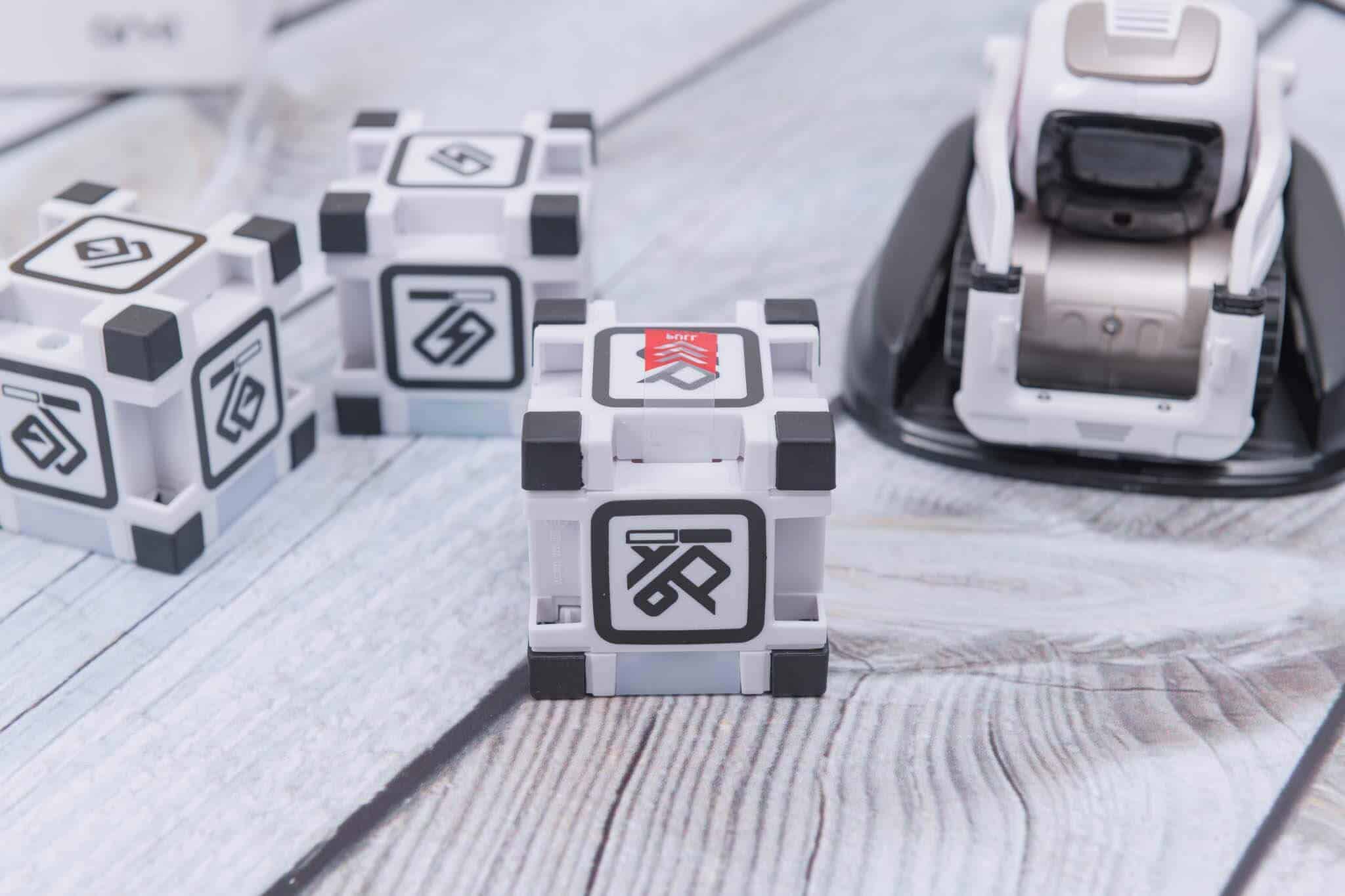 Each of the cubes have a plastic battery cover which needs removing before they can be used in tandem with Cozmo. The Cubes LED with temporally flash when the tabs are removed. 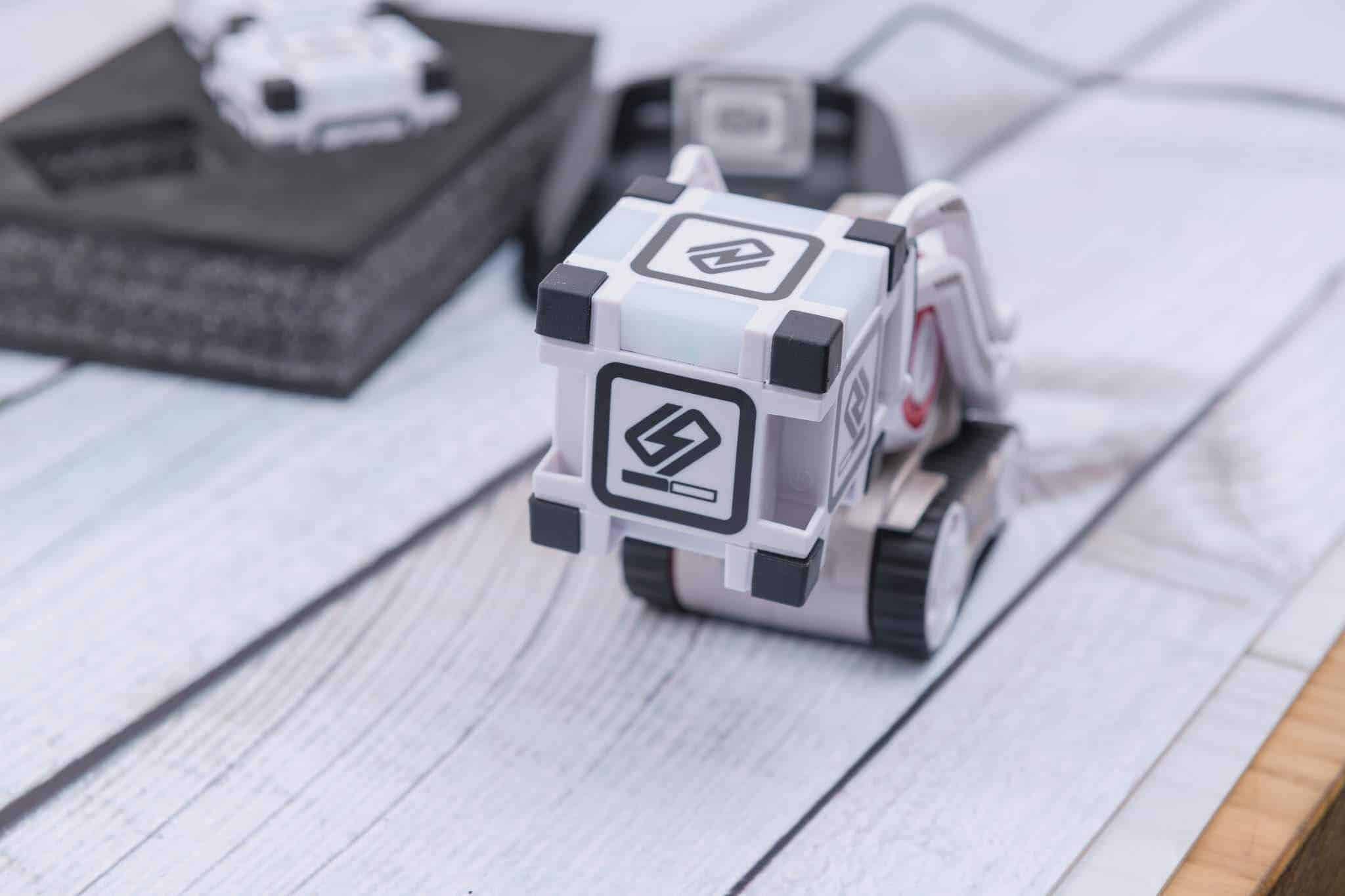 The first time Cozmo wakes up, he need to be calibrated. Cozmo will also need to see each of the cubes.

Each cube has important role in Cozmo’s interaction with you and the games you can play.

Each cube needs to be placed in-front of Cozmo, so he can see the cubes and register their presence. 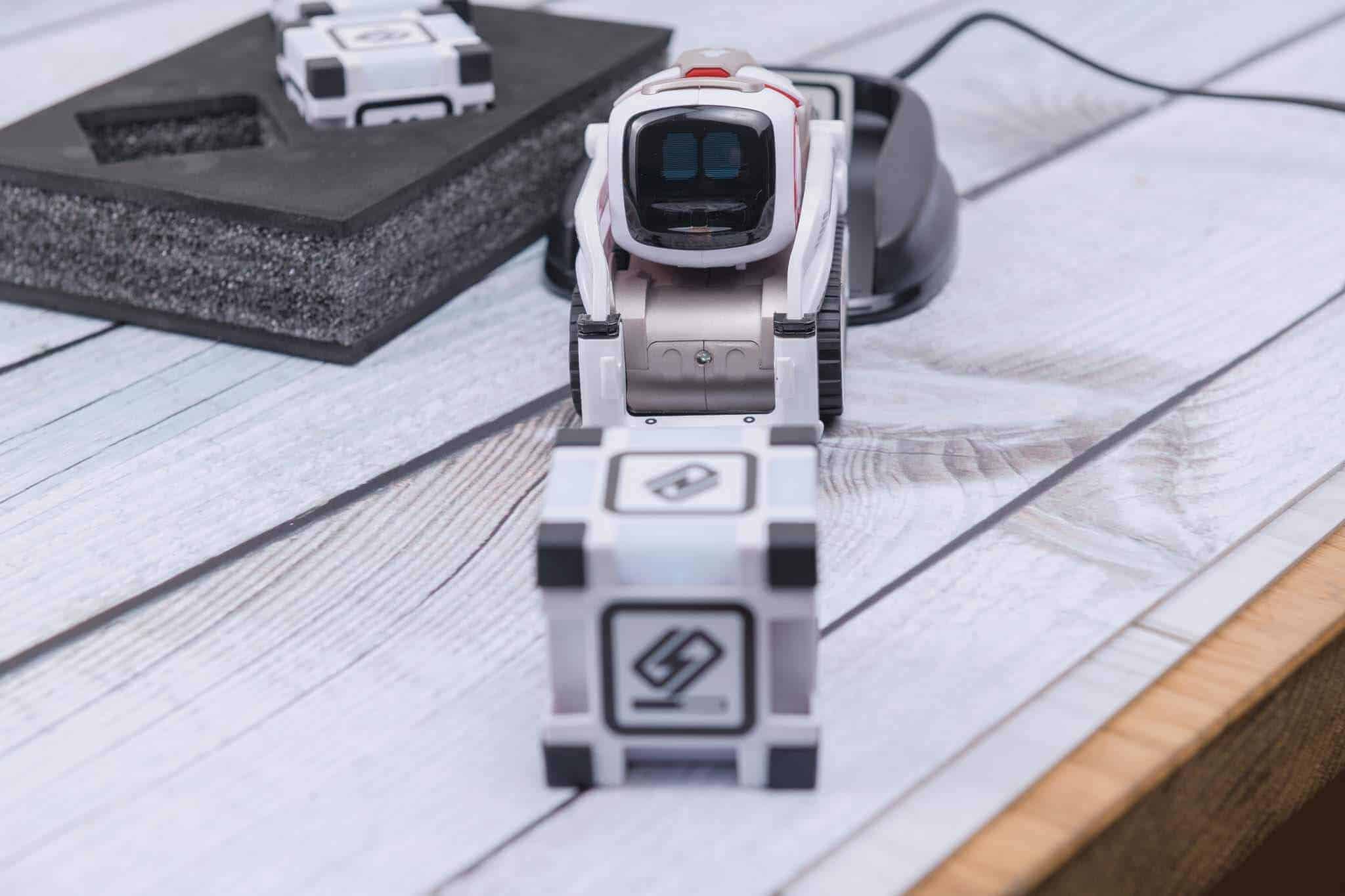 Looking for the Cube

You will also need to add your name so Cozmo can recognise who you are.

Cozmo is a super clever robot and can recognise speech, so once you have entered your name in to the mobile app, he will then be able to recognise your voice linking this to your face. Like I said earlier, he’s a small robot with a personality of his own. 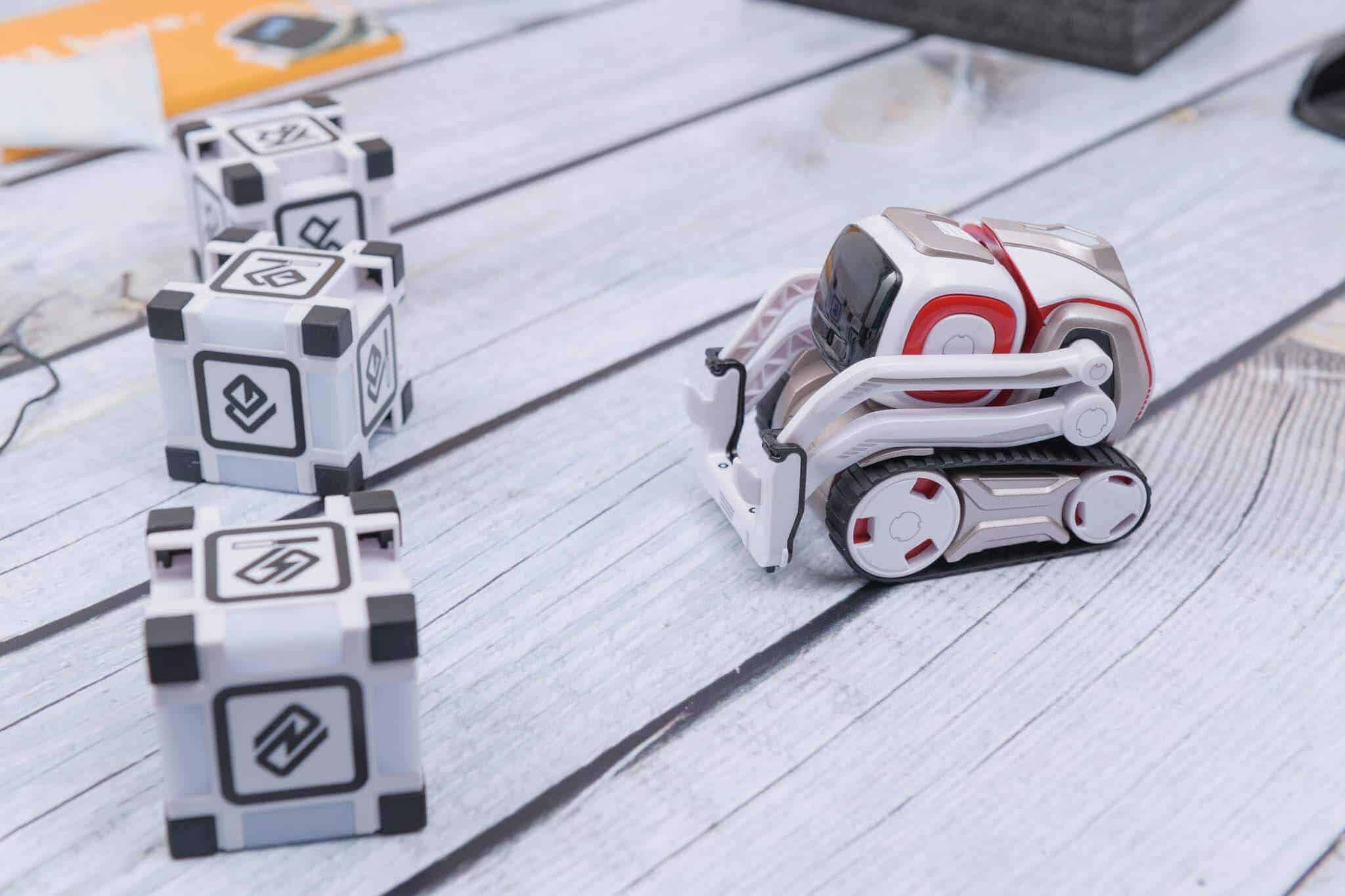 One of the first games Cozmo plays with you is Stack Attack.

You have to stack the cubes in a colours which Cozmo gives you. There are three modes, Easy, Medium or Hard.

You have to tap the cube for which mode you wish to play.

When you have stacked the cubes, Cozmo will scan the cubes colours to see if you managed to follow Cozmo’s instructions.

My daughter really had fun playing stack attack and found it a fun memory game and interacting with Cozmo made it even more exciting to play. 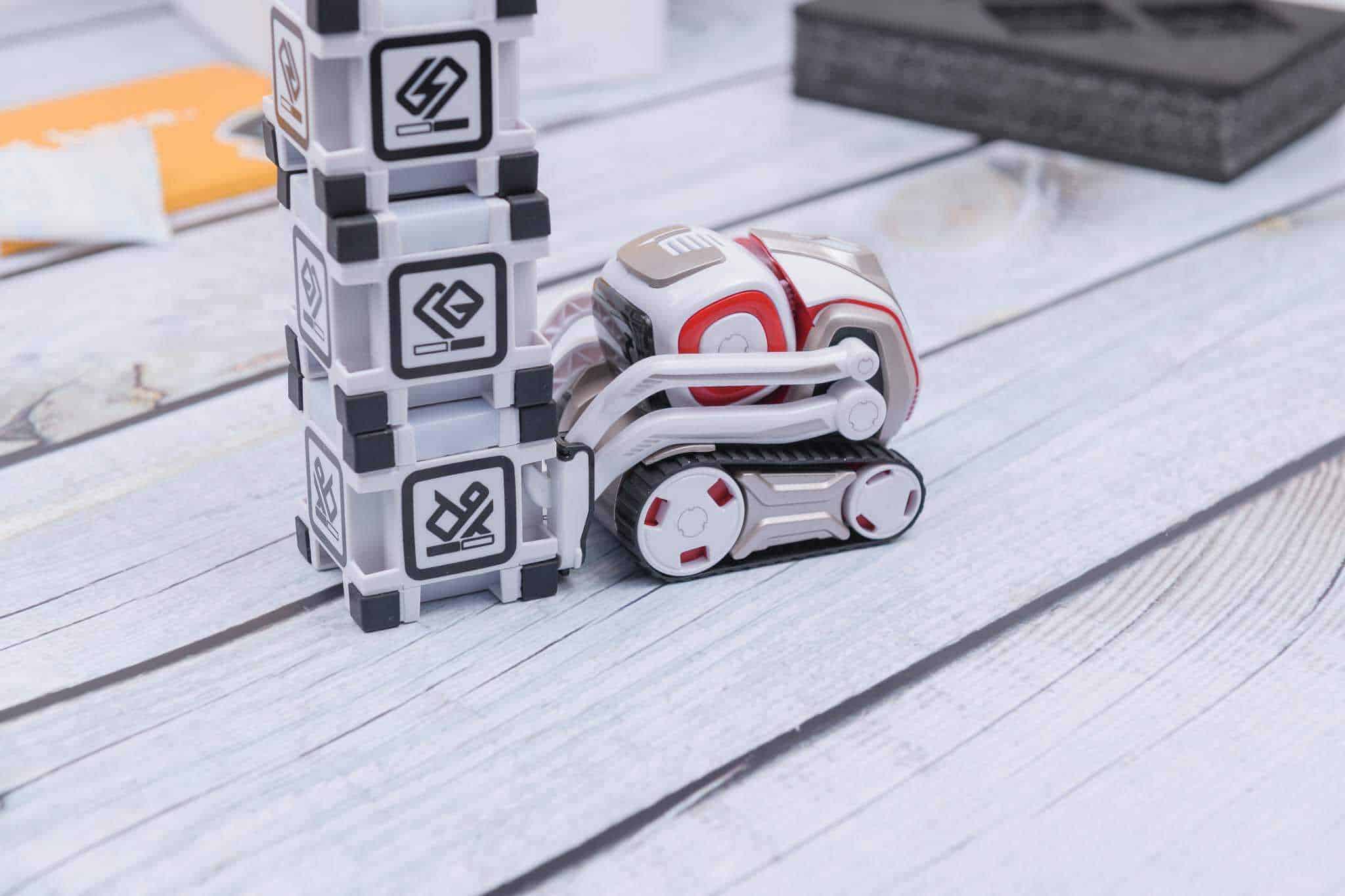 Cosmo will then move forward and topple the cubes. The kids will love this part as Cozmo’s cheeky personality will show through. It’s quite fun and made my daughter smile and laugh. 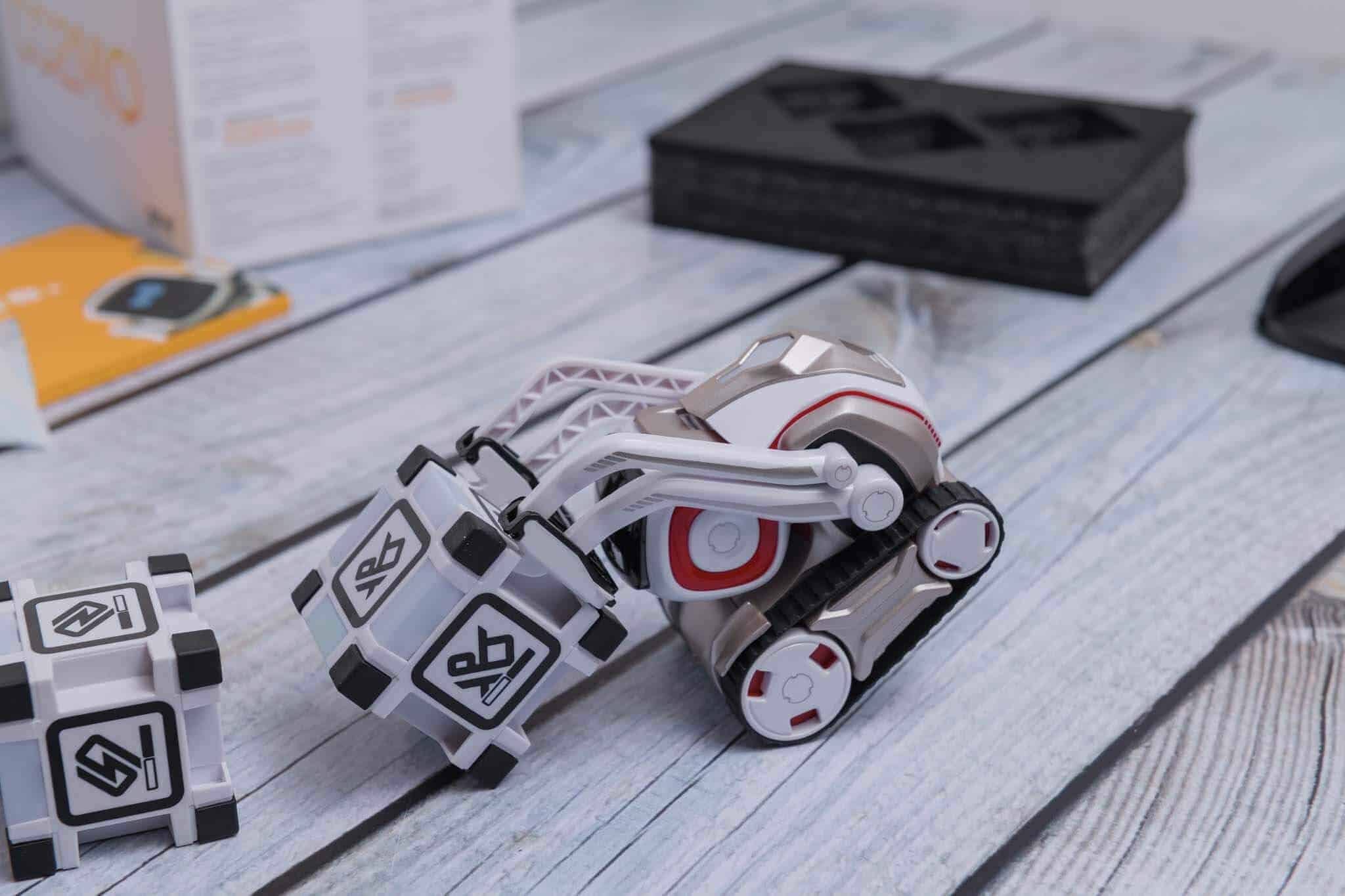 Cozmo loves to tip the cubes over and has great joy in doing so.

There are many games you can play with the cubes and Cozmo will explain each game as you play with him. Each game will so unlock another game for you to play. He will also send you notifications asking to play a game of his choice with you.

If you choose not to, he throws a small tantrum, just like a little child, but it is funny see a robot throw a tantrum.

Unlocking Tricks and Games with Cozmo

The more games you play with Cozmo, the more games and tricks you can unlock. With each game, you gain more points which then unlocks more tricks. 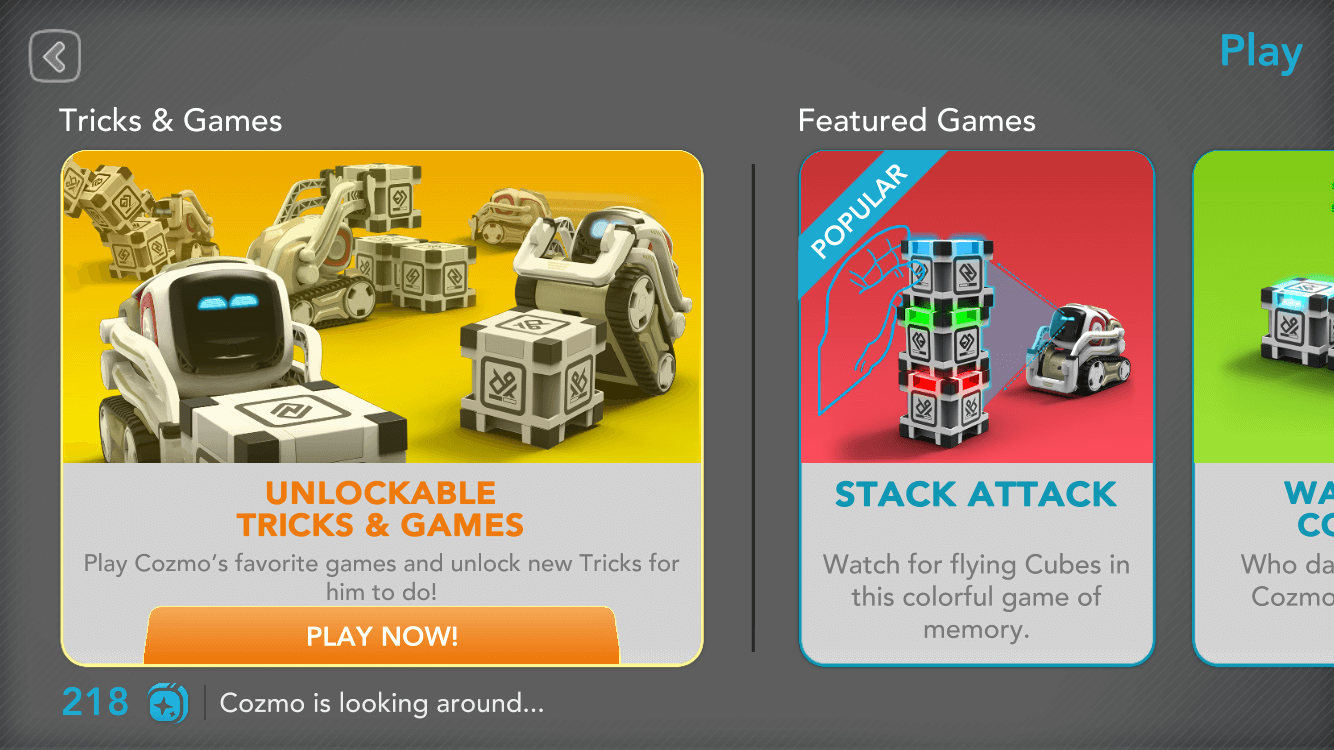 There are only a handful of games at first, but each game will unlock a new one, which will then unlock a further game for you to play. 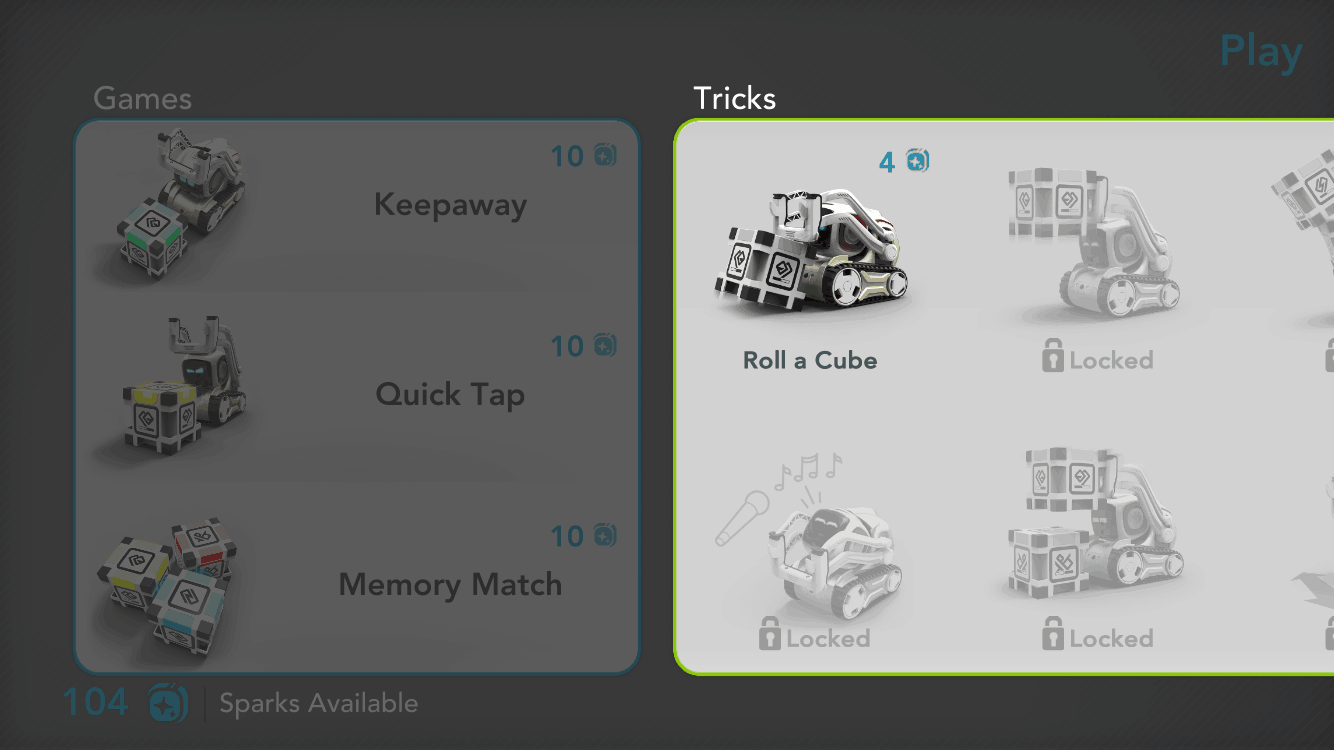 Another unique feature of Cozmo is that he allows children to learn the basics of coding. You can also program Cozmo using the Cozmo Code Lab.

Putting Cozmo to sleep is very easy, it is the same option to turn off the volume of the app or change Cozmo’s voice volume.

Cozmo will put himself to sleep just like turning off your computer safely, so you can then put him in his charging bay.

Cozmo is a cute little robot the whole family can enjoy. Our daughter really enjoyed playing with him.

Our family loves Cozmo and although he is the size of a computer mouse, he has a big heart and a mind of his own.

Over time, Cozmo will receive updates over your internet connection.

There is also an ability to control Cozmo through your mobile device and see the world as Cozmo see it.

At a price £179, Cozmo is not cheap but is a great teaching aide for schools and academic facilities.