This week we were excited to review the NERF Laser Ops Pro AlphaPoint Blaster 2 Pack from Hasbro gaming. My husband and daughter are both huge fans of Nerf guns and were really pleased to be testing out the new nerf laser guns for The Inspiration Edit.

How Many Players Can Play Nerf Laser Ops Pro?

The Nerf Laser Ops Pro allows up to 64 players to battle it out in one massive shoot out. We reviewed only two nerf guns and my daughter played the laser ops game in the garden with her dad. They had a brilliant time.

Nerf Laser Ops Pro is able to be customised and you can change the colours of the laser teams if you please. To do so you will require a mobile device and will need to download the mobile app available on both IOS and Android.

The single AlphaPoint Blaster comes with a bracket for single player mode however this is not supplied with the 2-pack version.

You can have up to 32 players on a team all using their NERF Laser Ops Pro AlphaPoint Blasters. Just think of the fun or mayhem with multiple Nerf Laser Guns.

Packed in the box and delivered from Hasbro, the Nerf Laser Ops Pro box contains two blasters which are ready for battle as soon as the batteries are installed.

Before you open the box and unpack the blasters you will need eight (8) AA batteries. That is 4 x AA batteries per blaster.

There is a small screw located at the front of the blaster where the batteries are houses. Simply unscrew and load the batteries, press the power button and you are ready to go. 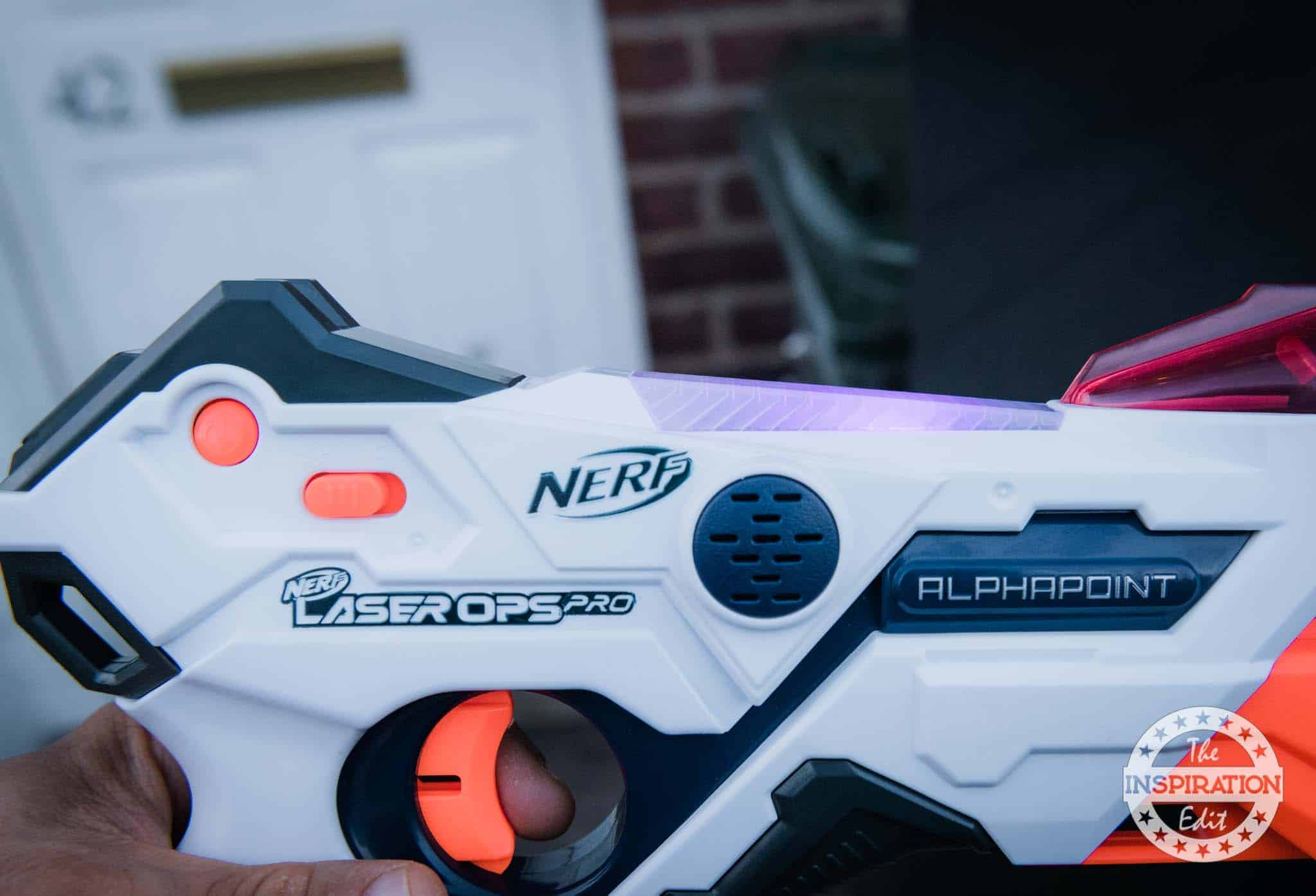 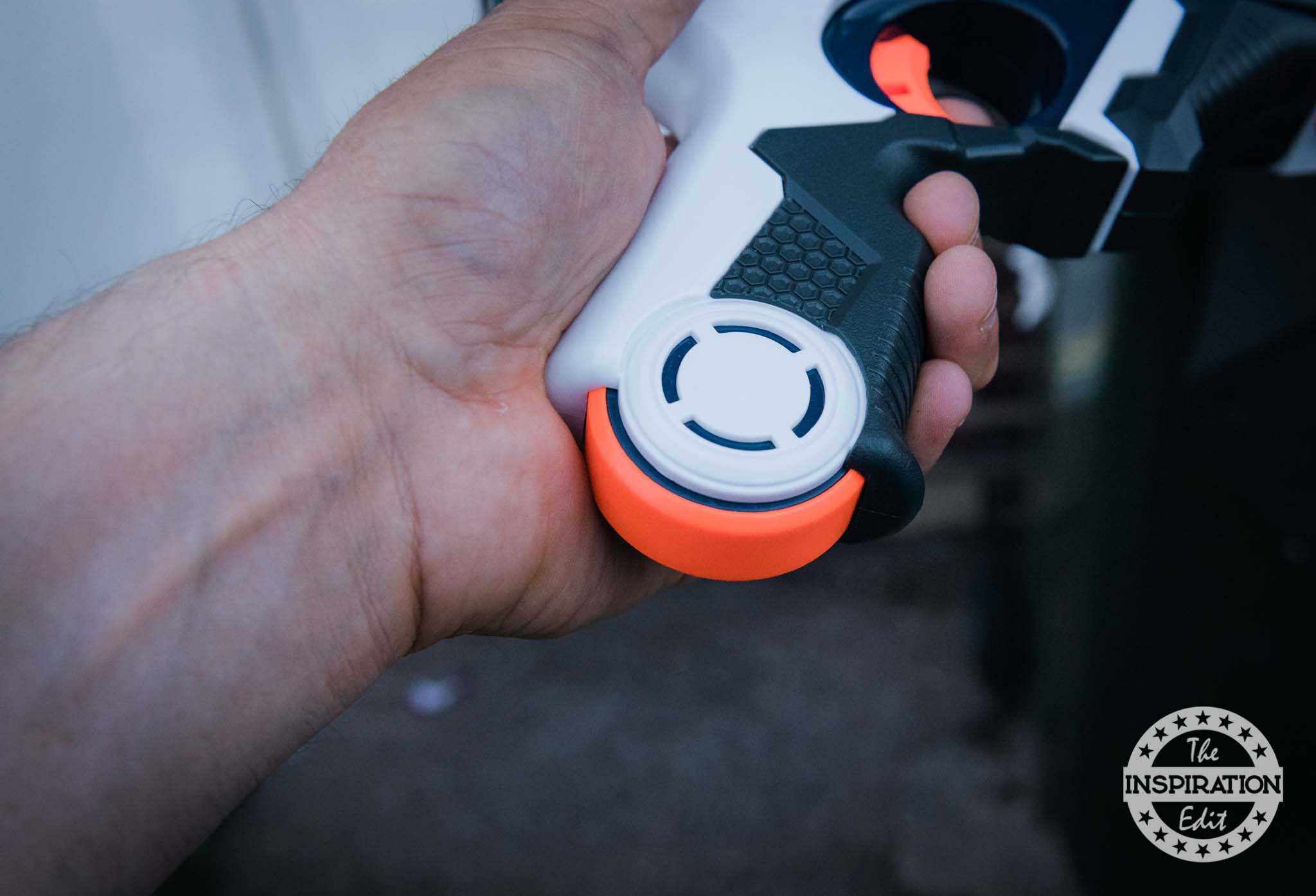 Just below the power button is an indoor and outdoor switch. When the gun powers on the first time, the main light turns purple for universal team colours.

To change colours to either red or blue, you need the app to calibrate each of the blasters and synchronised to change the colours.

There are options which can be made from the app, however, if you don’t have any small tablets or mobile devices, do not fear, the guns are battle ready and the kids can play for as long as there is power in the batteries.

Ammo and Health buttons are located at the back of the gun. When the gun is out of ammo all you need to do is hit the round button at the base of the handle and you are good to go again. The health button on the Nerf Laser Ops gun will flash when it registers a hit.

The most exciting thing about this Nerf gun is the Multi-Player mode (also known as PvP – player verses player) which as mentioned earlier, allows up to 64 players to battle it out with 32 players per team. No rubber bullets are required and this is suitable for the kids or the adults who would love this game such as my husband and his friends. 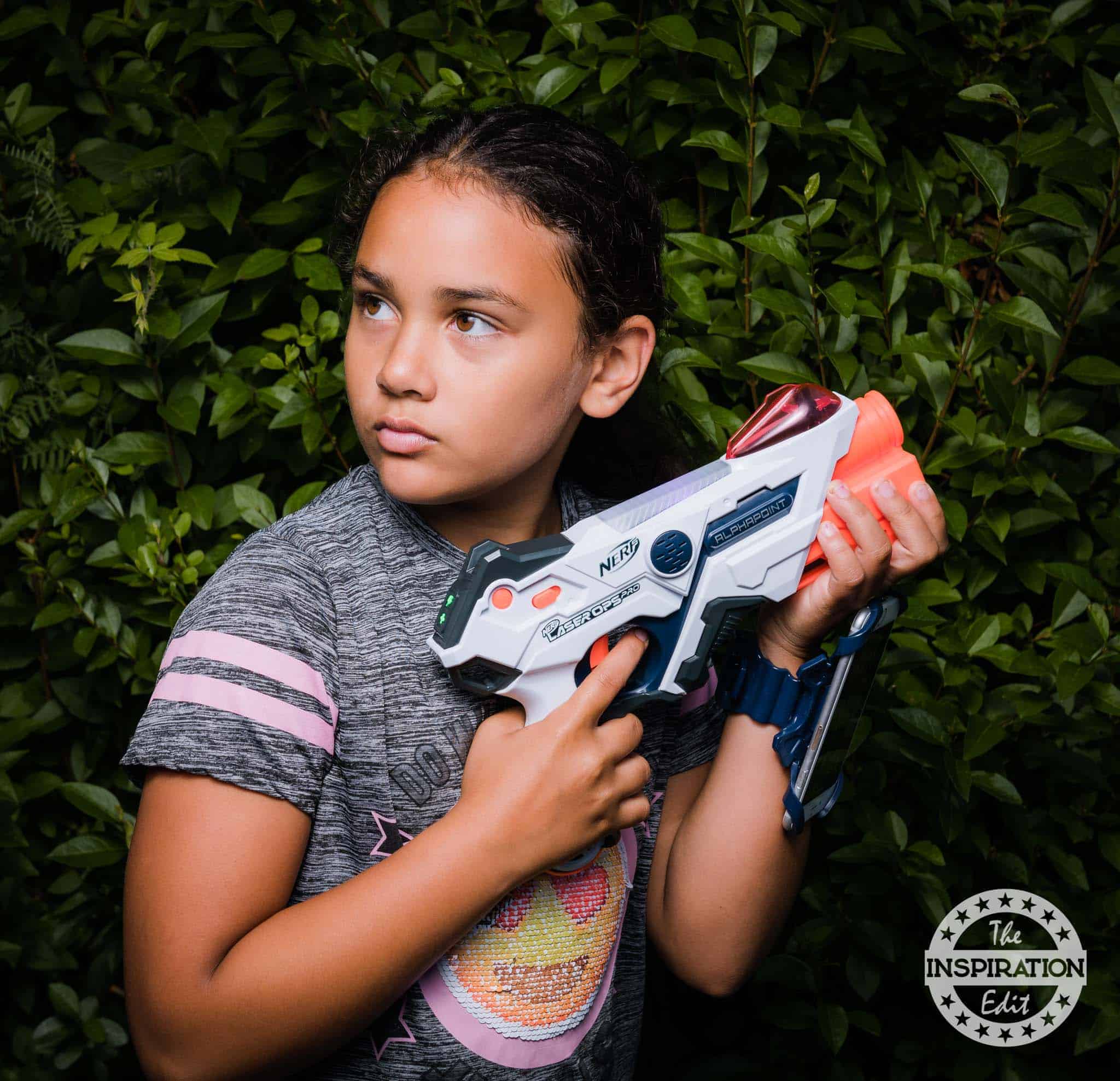 My daughter has been playing Nerf Wars with her friends they spent some time chasing each other wondering how to actually register a hit. My husband came to the rescue and helped Sylvia to work out what to do and she soon got used to it.

The red LED at the front of the Laser gun picks up any incoming hit you can take up to five hits until its GAME OVER.

The blaster is locked out for 5 seconds and to reset, you simply pull on the trigger twice and you are good to go again and continue your game.

Now, if the smaller Laser Ops Pro is not your thing and you want the bigger version known as the NERF ‘Laser Ops Pro Delta-burst Blaster’, which fires 3 shots per pull of the trigger. Delta-Blaster has an LCD read out for ammo and health indicator with a recoil mechanism to make the blaster feel more realistic.

The reload button is located further down the blaster. For the bigger kids, I can see them going for this one. Again, the same Android and IOS can be used with the Delta-Blaster.

To stop cheating and unfair play, each blaster has featured built in sensors in case a user tries to tape up the LED on the top of the blaster. When the LEDs are taped up, the gun will not fire or make the firing sound.

We really enjoyed using our Nerf Laser Ops guns and I can see these being popular with the kids. My husband thinks they will be at the top of nearly every child’s Christmas toy list this year.

Just make sure you purchase lots of AA batteries as they are NOT included in the packaging. These blasters will be popular for tweens, teenagers and parents a-like. To make sure you beat the Christmas rush, I would start looking or purchasing well before December.

*This product was sent for the purpose of review*