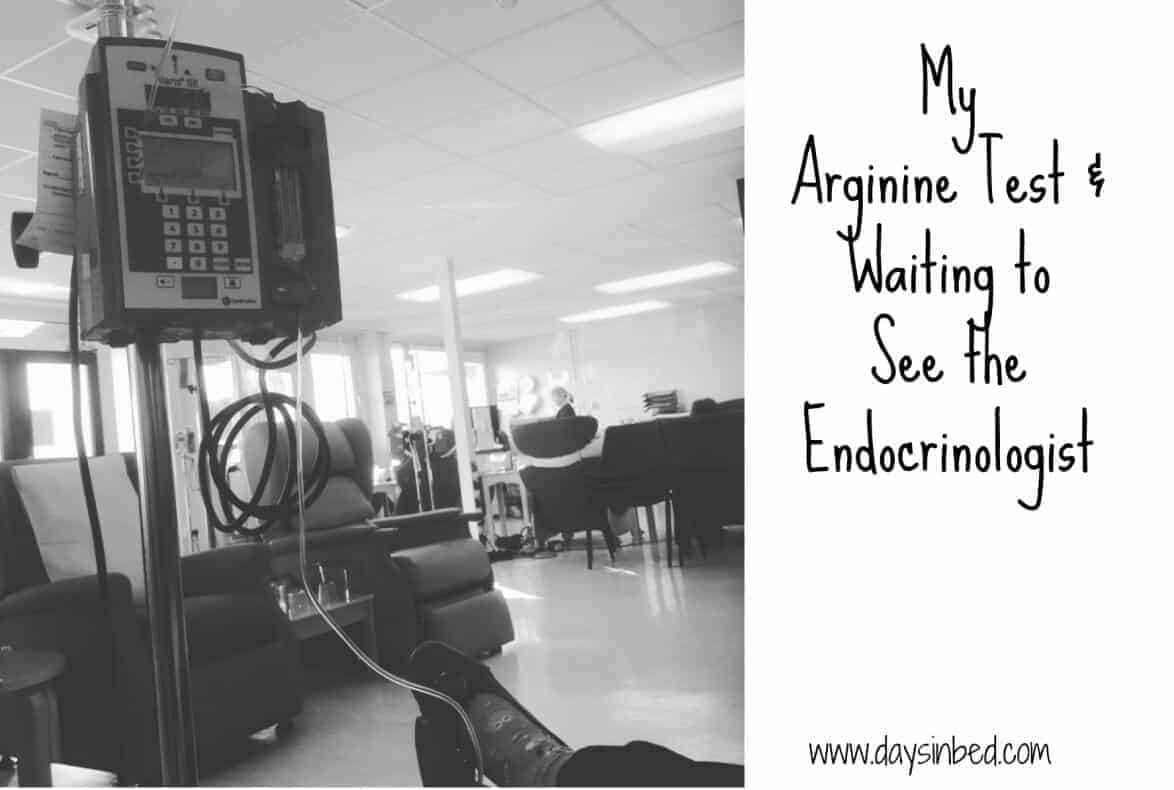 My Arginine Test and Waiting to see the Endocrinologist

This week I went for an Arginine Test at my local hospital.

An Arginine Test is performed to measure the amount of human growth hormone someone does or does not have. In July I had an Insulin Intolerance Test to measure my cortisol levels due to having adrenal insufficiency.

The test also revealed that I am Human Growth Hormone deficient, however to meet the criteria for treatment, I needed to do a second test to confirm the diagnosis.

Once the results come back I will then hopefully be treated for this condition. There are only 12,600 adults with this condition in the UK.

Repeat bloods were taken every 1/2 hour for another two hours and then I was able to leave. How did I feel? I felt dizzy and sick and wanted to throw up.

After the test I was able to eat as I’d been fasting since the evening before the test. I felt a little better in the afternoon and needed an early night.

The next day I slept. I slept all morning and all afternoon and still felt exhausted the next day. I guess the combination of whatever is wrong with me plus the test knocked all energy out of me.

Some of the symptoms of Human Growth Hormone Deficiency are

It’s taken months if not years to find out what is wrong with me. I still don’t have a complete diagnosis but I originally became unwell immediately after the birth of my daughter Sylvia.

Human Growth Hormone Deficiency as an adult is generally caused by damage to the pituitary.

The damage can be due to a brain tumour, an accident or sometimes during labour (known as Sheehan’s syndrome) when the brain is deprived of oxygen for a time damaging the small pituitary gland, the part of the brain which controls lots of hormones.

Personally I think I may have Sheehan’s Syndrome because my health plummeted after giving birth. My labour was really bad, I was not taken care of properly after the birth and was ignored whenever I tried to say how unwell I was.

After all, the midwifes saw me as a young first time mother who was stressed out and confused. I was much more than this, I was extremely unwell, I could not produce milk (my prolactin hormones was non existent- which is another sign of Sheehan’s) and my ability to concentrate went out the window.

My short term memory went down the drain so to speak and my muscles grew week.

In fact at 6 weeks, my daughter went into respite due to me being so unwell.

The doctors tried to say I was suffering from depression. I was not. I was assessed by a mental health team who determined I did not have postnatal depression, I had exhaustion.

I never did recover and over the years as my muscles got weaker and I got more tired I was told I must have fibromyalgia and ME (chronic fatigue syndrome) yet my experience never quite matched up with what I read about these illnesses.

In August 2013, I collapsed and has an Adrenal Crisis leading to my diagnosis of Adrenal Insufficiency. It would have made sense at the time for the Endo to test all my pituitary hormones, however, this was not done and now another two years on, i’ve finally been tested for GHD.

Being at the mercy of the NHS, tests and appointments mean waiting and waiting sometimes for many months. Well I’ve waited 7 years and next week I may finally start treatment for my Human growth hormone deficiency.

I get to see the Endocrinologist on the 16th and will also be raising my concerns about my cortisol medication which seems to not work. I all ready have a good idea of what will be said.

I will be told to keep losing weight and to wait and see if my new treatment (which they will hopefully give me) makes any difference and will be put back on the waiting list for another six months.

However, this time I’m going armed with everything I want to say. I will be writing it up in a letter and requesting better support to control my cortisol levels. I’ll  be making it clear how disappointed I am with the slow service and slow diagnosis and be asking what next?

Will they do a day curve test to check my cortisol levels? It’s been a year since the last one and that was not accurate due to the cannula falling out 4 times and being repeatedly stabbed over and over.

Also I’ll be requesting support for my muscle weakness. If I’ve been this ill for this long, I’m going to need some serious Physio type support to rebuild my muscle strength which is almost non existent.

I’m looking forward to next Thursday when all will be revealed and I’ll get a little further on my road to recovery. Until then this is my update.

Adrenal Insufficiency What it’s really like to have AI